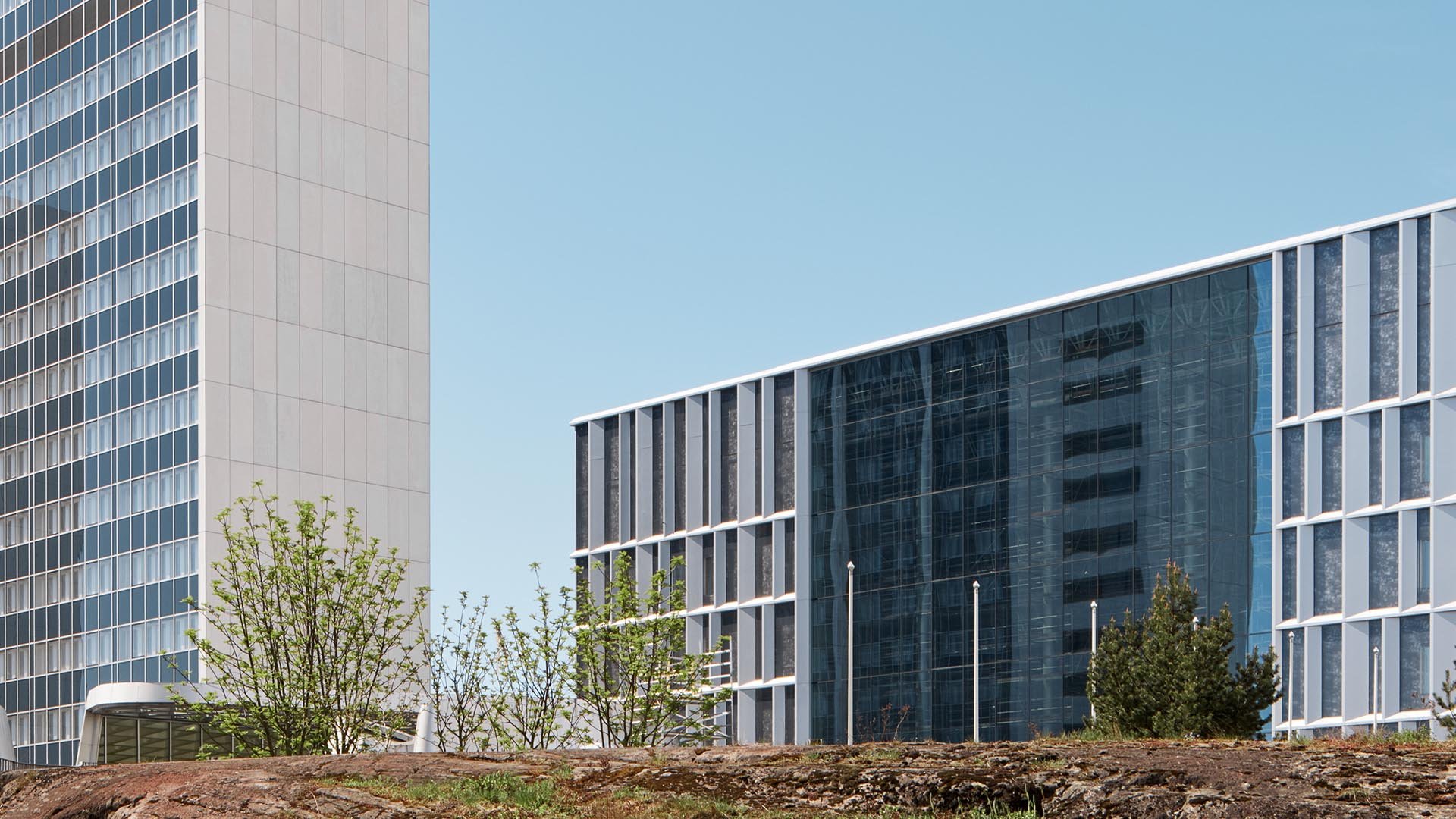 The most extensive HUS (Hospital District of Helsinki and Uusimaa) building project to date, the Bridge Hospital in Meilahti has been handed over to the client. The new hospital and its glazed two-storey bridge connect the Meilahti Tower Hospital, the Meilahti Triangle Hospital and the Department of Oncology. The architectural and structural design was guided by the efficient combination of functions and the building’s unique geometrical shape.

Built in between the Meilahti Tower Hospital and the Department of Oncology, the new Bridge Hospital will replace the Töölö Hospital to house the Orthopaedic, Traumatology and Neurosurgery unit, as well as oncology from the beginning of 2023. The starting point for the design aimed to minimise the amount of patient transport.

“All the functions and spaces in the Bridge Hospital are designed around the massive diagnostic and treatment devices. It is no exaggeration to say that the Traumatology unit may literally be able to save lives because the distance between examination facilities and the emergency room has been kept as short as possible,” says architect Matti Anttila from AW2 Architects, the principal designer for the Bridge Hospital. AW2 is part of the Team Integrated joint venture responsible for the principal and architectural design of the Bridge Hospital.

The triangular shape of the plot also largely determined the building’s footprint. The unique hospital building has very few 90-degree angles. The two-storey bridge links the two parts of the building, which are also connected with other existing buildings on the Meilahti hospital campus, a network of underground passages and hospital technology.

Patient rooms with a view

“The entire hospital is designed so that patients and visitors can intuitively find their way to the right rooms without wayfinding floor graphics. The waiting areas all extend from “internal streets”, and the facilities are grouped around three tall glazed lobby spaces, which help with orientation,” Anttila says.

“We have utilised the natural light to full extent. The spaces offer fine views of the surroundings, and some patients’ rooms even have a sea view. The sea has been a source of inspiration for the integrated art on the facades.”
The curtain walls are supported by thermo profiles and clad with aluminium frames and clear, silk-screen printed glass. Artist Sari Palosaari’s serigraphic work creates a reflection of the sea onto the building.

Digitally modelled integration of the old and the new

The two parts of the Bridge Hospital are linked by a 40m two-storey glazed bridge. It also provides access to the previously separate Department of Oncology and Meilahti Tower Hospital. The structurally ambitious bridge as well as the two geometrically striking building units were digitally modelled based on the structural and architectural data.

“We were able to compare different structural solutions at a very early stage of the project using highly realistic virtual models. Data models also played a key role in enhancing the collaboration between designers and engineers, and in coordinating the old and the new,” says Harri Kivistö, unit director for structural engineering at AINS.

The Bridge Hospital project involves 16 different fields of design and engineering and the digital building designs included approximately 200 different construction models. Data models also played a crucial role in presenting the designs to the client and in the joint designing process with the hospital representatives as well as on the construction site of the main contractor, SRV.

“The Bridge Hospital and its technologies are connected through an old 100 metre tunnel for patient transport and building services that runs across the campus beneath the newbuild. The tunnel was retained for cost reasons, and it has been successfully utilised throughout the building project,” Harri Kivistö says.

The principal and architectural design was carried out by Team Integrated with contributors from an AINS Group company AW2, Brunet Saunier Architecture S.A., B&M Architects and Harris-Kjisik Architects. AINS Group was responsible for the principal structural design as well as product compliance and moisture control coordination, and provided assistance in the developer duties.

Launched in 2018 as a joint project management contract, it was completed in the summer of 2022 and followed by the furnishing and installation project. The hospital operations will begin in early 2023.

'We have utilised the natural light to full extent. The spaces offer fine views of the surroundings and some patients’ rooms even have a sea view.'